This week I realized that Sasha didn’t learn her lesson. “What do you mean, Lola” you might be wondering. Well, I shall explain:

Last year (or some other time. I don’t really remember the exact date, ok. Don’t judge me) Sasha had an encounter with a wasp. She was playing around with it when she decided to bite into it. To Sasha’s surprise the wasp stung her. And she ended up with a big fat lip. (Too bad I didn’t get a picture…)

So, now that you are filled in, you would think that she had learned her lesson and stayed far away from wasps ever since. BUT NOOO. That daredevil had to play Russian roulette with danger once again!

Here is the video of Sash harassing the wasp.

This time she got lucky. But maybe not next time… 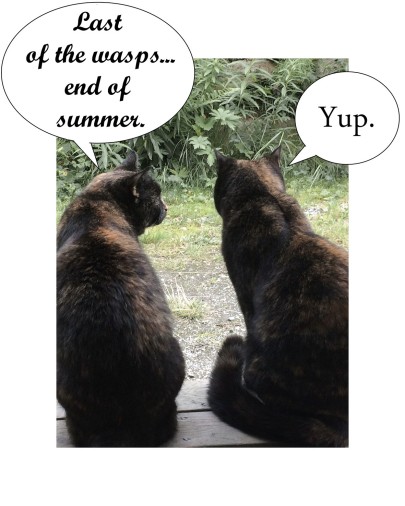 It is estimated that there are over a hundred thousand described species of wasps around the world, and a great many more as yet undescribed.

(Hey, Sasha, wouldn’t it be neat to discover an undescribed species of wasp? If I did that, I would name it after you: Vespula sashula. How does that sound?)

5 thoughts on “Learn Your Lesson”