Hey Lola, how did you end up here at Zoe’s house? Good question, Sasha. Me and my littermates were homeless and I was taken to a foster home. I was very little at the time so I don’t remember much. My foster parents were quite nice and there was another cat there that became my fostercatmom. Her name was Leeloo and her story is very memorable so I will tell it now. Here it is:

Leeloo was found in Tromsø on a cold night in a rubbish bin. She was dumped in a cardboard box and the cardboard box was tightly taped closed. Leeloo immediately received a foster home, but the process of getting Leeloo back to being a happy cat was unfortunately long. Leeloo was very stressed when she came to the foster home. Big clumps of her fur fell out and she hid under the couch for weeks. If one walked slowly past the couch a low hissing could be heard from under the couch.

There was no doubt that Leeloo had been strongly affected by the incident. It is unknown what Leeloo experienced before she was considered garbage and packed into the box, and it is not known how long Leeloo sat in the box in the container before she got help. With time and understanding Leeloo became herself, little by little. Eventually Leeloo stopped hiding under the couch and came out and sat on the couch instead. Cuddles became a part of everyday life, and after more than a year Leeloo would finally find a new home. By the time Leeloo was re-homed she was as nice a cat as anyone could dream of. She had also been a great foster mother to me!

Leeloo’s story was told in the magazine published by the animal protection society of Norway. Here is a picture of me and Leeloo that was in the article (I was about 3 or 4 months old): 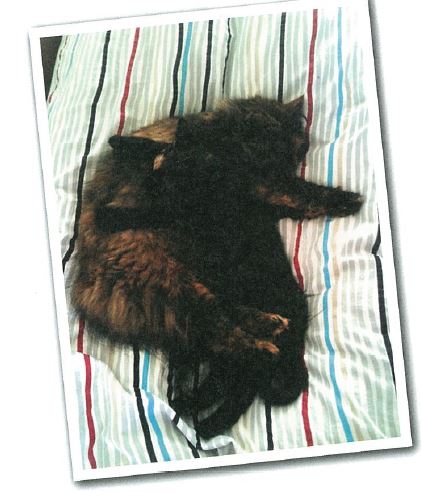 Here is another picture of Leeloo from the same article: 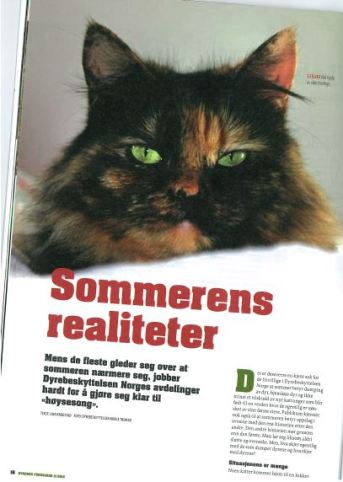 By the way, my name was Johanne when I lived with Leeloo. Zoe changed it to Lola, which I like better. Thanks for that great story Lola. Next time I’ll tell you my story.